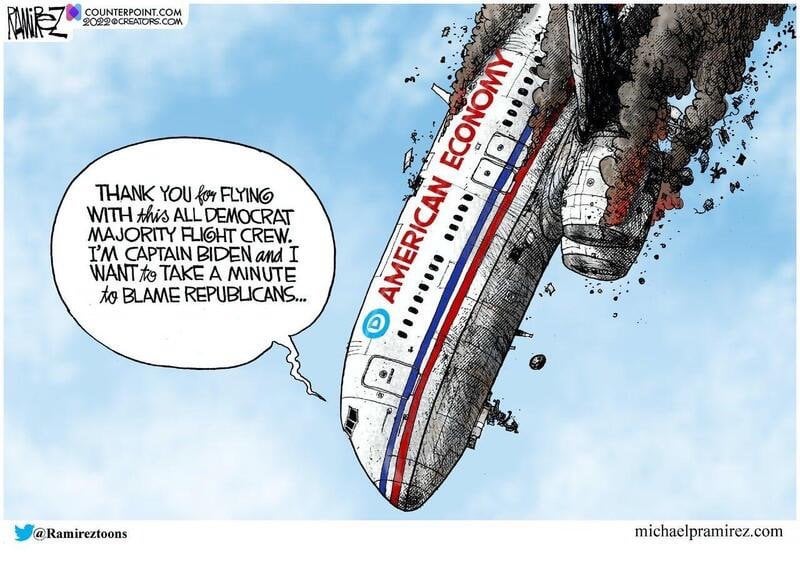 Sadly, the analogy is not much off

35 replies on “Unfortunately, the analogy is not significantly off”

He learned well from Obama!

Pains me to say this but we’re only getting started.

What’s with the random cursive words?

Last round of COVID checks didn’t need to be given out. Europe only has some inflation from the price of oil and supply constraints. We have excess demand here as well which could have been lessened.

as a life long Dem I feel like Joe’s on a mission to destroy my party. I’m beginning to believe he may compromised , or even an actual Chinese asset

The main problem with the analogy, is that Biden isn’t really the cpt.

Unfortunately how true. After the airlines started hiring pilots based on gender and race, not experience n expertise, I stopped flying.

I don’t care what sex, race, creed or religion my pilot is but I care a lot that they are able to do the job!

Govt. spending is one of the primary causes of inflation, this admin is def guilty and adding another $40B to Ukraine and potentially student loan forgiveness doesn’t help. I know Trump kept talking up the stock market and had some tiffs with JPow but really 2 years before the pandemic was the time to get interest rates up. It may have hurt a bit coming into the pandemic, but we wouldn’t have know that and now we’ll be experiencing this “transitory inflation” for years to come – it’s pretty much locked in. All of our leaders have contributed to this mess and they pretty much know it.

The cartoon is close.

The plane should be depicted as more or less intact, and the pilot intentionally crashing it though.

We can complain but make sure the people we are getting behind now represent our values and our communities. Personally vet and investigate candidates and engage with them. Change is only positive when it is meaningful. I am tired of the McCarthy, McConnell, Graham, etc….pretending to be for the people and and then doing backdoor deals and voting the opposite of their constituency. Time to clean house. I respect those like Rand Paul that votes with his feet.

Imagine voting for a candidate who’s economic policies are so bad that it causes a baby formula shortage 😬 that’s fucking embarrassing and more shameful than voting for Trump. Yeah he might be a stuck up New Yorker but at least his policy was good and everything was plentiful

Dems got cocky, thinking they could use COVID to usher in a transformational age of government.

What they weren’t prepared for, were the repercussions of their efforts. Turns out when you try to wield the regulatory state for political ends, you’re going to end up in disaster.

Yeah, I didn’t want to be the “Stereotypical Republican” that just complains about how bad Biden is for the economy, but my stocks, namely VASGX and VBAIX have gone down each like 7 whole dollars since he’s taken office. I don’t know what they hell he’s doing up there, but I’ve really taken a hit as a result of his poor policies.

Senile Old Joe thinks up is down and down is up?
Maybe he’s not as senile as he lets on and he’s actually a Chinese agent. Either way his touch (similar to the fabled touch of King Midas) seems to turn everything to SHIT!

We will most likely be reduced to eating our pets for Christmas dinner, but oddly the Dems will have won increased majorities in the midterms.

Why do people want to see our economy falter? As Americans I thought we were supposed to wish for the best to all of us no matter who’s president?

If you think the Democrats are the only party responsible, I’ve got news for you…

Genuinely. What are the marks of a good economy? Economic output and GDP. Latest numbers show 2021 was really good. 2022 Q1 GDP fell by 1.4% – not good. But I think you need another quarter to really tell. The UnEmployment rates are at near historic lows, nearly matching pre-pandemic levels.

Devil’s advocate here… But I feel like what is going on with the Stock Market is a retraction/knock-on effect due to past couple of years of economic policies and national growth being hampered by said economic decisions, groups within the US taking advantage of the situation, and over all just a lot coming to a head very quickly.

Bruh our economy has been terrible for most people for decades, it’s in a tailspin thanks to corporate greed. Biden is no more or less responsible for it then trump or Obama. What would you have him do differently?

So when I am told that the economy always does better under Democrats, was it always bullshit, or is this the first time something like this has happened?

Unrealistic. There was no declaration of intersectionality points and no land acknowledgement

To borrow this metaphor, I think the plane has long since crashed. We just don’t know we’re dead yet

I hope y’all will hear me out, but this is kind-of an illustration why I hope Republicans will gain the Senate but lose the House in November.

The Senate controls SCOTUS appointments, cabinet-level confirmations, etc. so that’s where the real money is in containing any long-term damage Biden does. They can also crush any bills they don’t like that come from the House.

But all signs point to a recession in the next few years. I hope they’re wrong, but If it *must* happen, may it happen around April of 2024 so it’s too far along for Biden to drop out of the Presidential race and thus he needs to own it.

Now, what do you think Biden’s gonna campaign on? He’ll blame it **all** on Republicans, even though we all know it’s actually happening because the Fed is trying to get the inflation that **Biden’s policies** caused under control. When even the New York Times criticizes Biden’s 1.9 trillion stimulus from last year (which is the root cause of all this inflation–though the Times is too biased to admit *that*), you know he has few defenders.

It’s gonna be *very* hard to convince voters that a party that only controlled 1/3 of the government for a mere 16 months of the last 3 years is the one responsible for a recession.

Republicans will walk into 2025 controlling all 3 branches of government easily. Theoretically, at least.

This WILL be the turning point in America, God Fucking Speed which way it will go.

Let’s just throw piles of money on all our problems. Don’t worry we don’t have anything to back it up. That’s okay.

I’ve been saying for a while that we’re in freefall and have yet to experience the impact yet and thus everything seems “fine”.

So, how many people have figured out that the Dems truly aim to crash the economy because it’s a critical step in establishing absolute socialism… not to mention their goal of disolving the US in favor of a global society without borders.