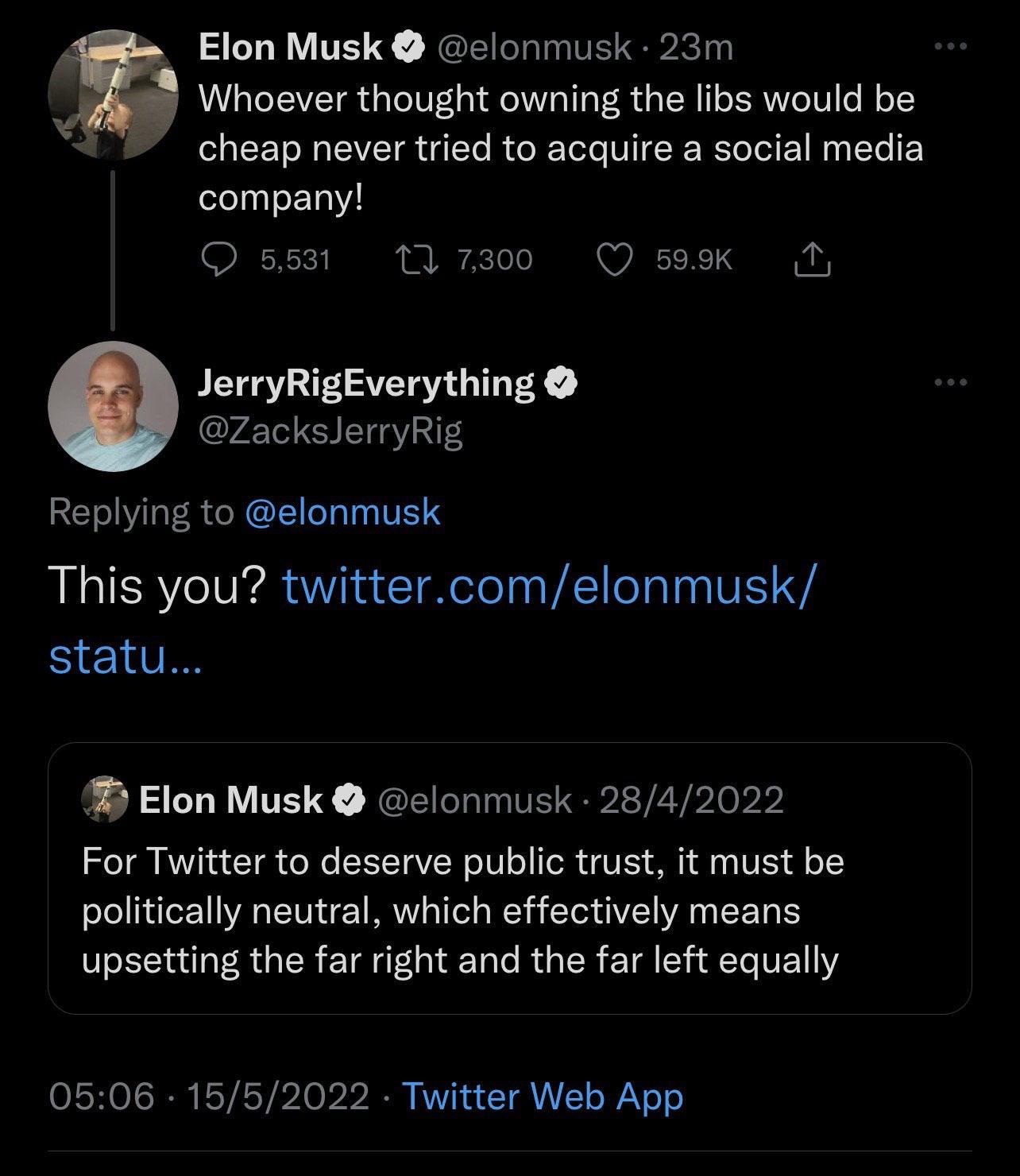 35 replies on “The Musker definitely exhibiting his correct colors…”

It’s Musk. Why do we think anything he says is going to age well? He’s a douche🛶

I don’t even know if he’s trying to be political with that. He just sucks at being edgy and relevant.

The bubble has fully formed around him and he’s lost in his own sauce. He’s completely shaped into his final form. A Facebook dad who picked a side and made it their entire personality.

The US really needs to stop bailing out this trash panda.

Every single time i look at Elon Musk i just see a 14 year old boy with no father, a pilled out mother and 300 billion dollars

Kudos to him for going after *checks notes* the people most likely to be in the market for environmentally friendly vehicles.

Are those liberals being mean to whittle Elon, guess he’s gonna do the pathetic move of buying the platform people use to talk, that’ll show those mean wiberals!
you can be the richest man in the world, but also, the smallest person in it.

The Left: “Equality for all”

The Right: “Death to (insert group)”

Musk: “These are the same”

There is no far left in America.

Oh no the musk lickers are here lol

Tired of owning the libs statement. You say one thing that leans left. Can’t we just get along without trying to “own” eachother

Give the guy a break!! He can’t keep track of his constant string of bullshit, he’s too busy being the most embarrassing man on the internet.

The richest man in the world is a edgelord, and it depresses me.

This just proves that people on the right will go into debt just to own the libs, for example the semi-truck Christian crusade who are now out of contracts and black listed and are asking for Gofundme money lol

didn’t even take him a month

It’s silly how Musk tries to play the ‘Im for-both sides!’ card while catering to the right and stereotyping the left.

Like, no. Musk isn’t trying to ‘free twitter’ or ‘give the right a fighting chance’. He’s just catering to the right

He got so tired of getting owned on twitter that he actually bought it. He is the most insecure man in the world

That milk didn’t stand a chance.

Looks like a repost. I’ve seen this image 2 times.

I thought this was a dad joke. Like he references owning the libs (i.e., winning), but he’s actually trying to purchase a major left-leaning business and it’s quite pricey.

Man, it’s really hard to get humor when you’re looking to be upset by everything.

I see lots of confusion. Here is my take from his possible perspective.

2) far right thought and speech appear to be silenced but far left is not. So trust is weakened

2a) this supports liberals appear to be in control of Twitter.

3) controlling media is controlling the people, so controlling Twitter is a possible form on owning the liberals as having control can be a form of owning.

Basically in no way is having Twitter owning the libs though.

Can’t be mad at the richest African-American🤷🏽‍♂️

Have any “libs” been “owned” yet, by anyone?

What is going on with the water in Flint

He is the most pathetic billionaire. He really doesn’t like the right wingers, but loves the way they are worshiping him. So desperate for admiration he bought times person of the year and now he’s tweeting about owning the libs. 🤷🏻‍♂️

Considering he is the leading manufacturer of electric cars… I’d say he spent years pissing off the right far more than he has pissed off the left. Its actually hilarious how many people are mad about this.

Elon Musk is such a fucking dipshit loser