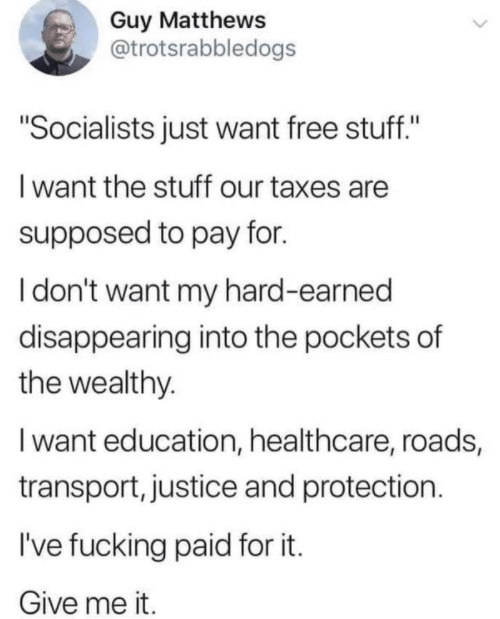 Yea this entire system needs to be thrown overboard along with the politics that vote in on this system. After that, forbid lobbying and any types of gifts from the rich overlords so they don’t get to make the rules anymore.

I don’t know who needs to hear this, but the US is never going to stop being uber capitalist.

They’ll keep on doing it even after there’s no one alive to give them money.

This is the way.

I believe I read that health care spending in the US is one highest in the world. But why doesn’t this benefit patients as much as it should? Collusion between big pharma, big insurance, medical facilities, lobbyists, and politicians to monopolize their control on power by ensuring obscene profits rather than help people get well. There’s more money in “medicine” than cures, health, or wellbeing.

Why are certain folks so against free stuff just bc they paid for college in the 70s by working part one to pay their $650 semester college tuition? Why wouldn’t you want higher education and healthcare to be free for all? Wouldn’t that make for a smarter, healthier country?

We spent 22 trillion dollars over 20 years and the state department couldn’t keep one already crippled country under the thumb of hegemony long enough to get every chopper off the roof of the embassy.

DC Defense firms want free money, we want something that helps us here and that actually works.

yup, I live in los angeles $1B a year to the police. $800B to the military a year. Meanwhile there are homeless people everywhere. People in this country who desperately need help and housing. My preference would be my tax dollars go to a good use i agree with but second option would be to not pay taxes if it’s just going to used for bullshit

That’s not socialism, so why call yourself a socialist?

I want to shout this sentiment from the rooftops. Taxes themselves are not evil. They are intended to pay for OUR public services, such as healthcare, education, roads, libraries, and so much more.

I wake up every god damn day and go to my shitty boring job only for 1/3 of my money to be taken for “taxes”. Where the FUCK are my good public schools, roads, and libraries? It pisses me off to no end.

We have endless money for war and tax breaks for billion dollar companys but no money to replace the lead pipes we are drinking water out of.…wtf

They’re literally just parroting sinclair tv and radio and what they heard from their parents growing up. Folks talkin shit about “socialists” wouldnt think twice about social programs if talking heads werent screaming bloody murder about them all the time

[Framing is important](https://en.wikipedia.org/wiki/Framing_effect_(psychology) ) – this is why you should call it inheritance tax instead of “death tax” and public funds instead of “taxpayer money.”

That’s not how socialism was defined in several books and practices.

A tax funded service is not Socialism.

Socialist ideology calls for a government monopoly on production as it suppresses private ownership. Marx was very clear about this.

Republicans call *everything* Socialist these days. They need to spend a year in Cuba so they understand just how wrong they are.

We need the best military in the world to waste 20 years accomplishing nothing and being prepared to deafeat the same formidable foes that cant win in Ukraine.

Words matter and this is an important way to phrase this issue. I don’t think anybody is figuring on getting free stuff. We just want our taxes to be used for things that actually benefit us. Nearly 40% of my paycheck is removed every payperiod and it mostly goes to turning middle eastern kids into skeletons, corporate/billionaire tax breaks and social security (which I expect to not be able to collect by the time I actually can).

Pennsylvania has the highest road tax in the entire country. CA is second… SECOND.

guess who has the worst roads in the country? Yeah…

$4 billion of the road tax over a number of years, which is only suppose to go towards roads, goes to the state police. The state police also make money in other areas.

On a completely unrelated note, a couple of years ago the state police showed up to a neighbors house and blocked all the roads coming and going to our area. Kept everyone in their homes. Yelled at the house for around 5 hours. They had maybe 30+ officers here, a skidsteer with blast shield, snipers… fucking snipers. Bomb squad. When yelling at the house didn’t work they threw flash bangs into it.

At one point the guy they were trying to get to come out tried to go up the road to where his house was and was stopped and told to turn around, no one could come in or out. The other officers forgot to tell the people controlling the road who they were even looking for. So he left and went to a family members house to wait for ‘whatever was going on’ to end.

The entire standoff took around 6 or so hours. We all found out later that a bomb threat was phoned in, said that he had two hostages and was going to detonate bombs he hid around houses.

The state police thought, through their amazing training, that the best way to handle this was to lock people in their houses so if the bombs went off, that didn’t exist, they would kill everyone. Their best way to protect the two hostages was two… flash bang them and scream at a guy for 5+ hours. BTW they have thermo cameras that can see through houses… they didn’t use them to find out if anyone was even in there. Maybe $20,000 in resources just up in smoke. How many got paid overtime too?

Every single talking head on FOX News is making over $5 million a year, and they will say “you just want free stuff” the second anyone brings up Universal Healthcare.

It’s much better to keep blindly paying in to their system and hoping for that trickle down to finally come. I’m sure that’ll fix everything.

“What? You’ve squandered all of our money and gave it to a few select individuals by allowing their collusion and corruption to freely spread and influence? The fuck? Are you useless or actively against us? Sure seems like you’re actively against us. Anyway, here’s more of our money, and there’s more where that came from, for when you screw us over again, so don’t actually change please, we love this deal.”

The funny part of this post? Most of those things are notsocialist they are capitalist, particularly the way he frames it as “he paid for them with taxes”. Socialism is when the means of production are owned by the government. The government getting taxes and going to a market to buy public goods is not socialism. The roads are built by a private company paid for by the government, that’s capitalism. Healthcare (could) be socialism but paying private hospitals and health care providers is also not socialism. If they were government drug providers, hospitals that are operated by the government like the VA then it would be. Schools…ok he’s got me there they are government employees, but the point still stands. We have such a warped view of economic policy in this country it’s incredibly frustrating. The right has won the language game with socialism and the new definition is “If the government does it, it’s socialism.” I honestly don’t know if we should try to fight that definition or just accept it and say sure if that’s what socialism is I’m a socialist.

Best I can do is increase the taxes

The bottom 50% of the population pays no taxes. The rich are the only ones actually pulling their weight.

“Give me it” will never not sound weird.

“Give it to me” just sounds better.