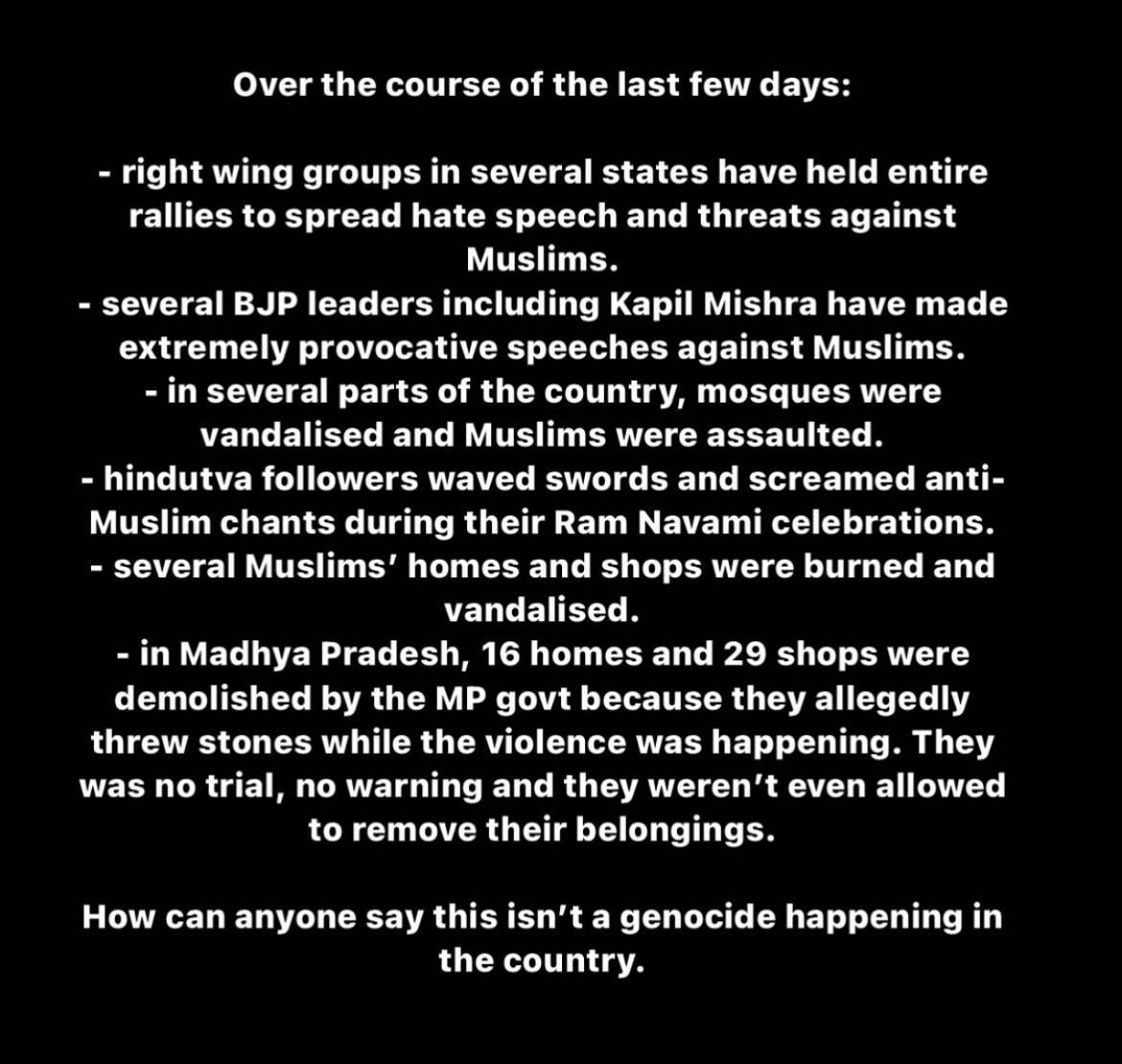 17 replies on “Pray for Indian Muslims🤲”

It’s the fault of the Muslim in India themselves. It is wajib for a Muslim living in a non Islamic land to do Hijrat or try to bring an Islamic government. India is dar Al harb

It seems Hijra is necessary. Can’t you all come to Algeria ? We have vast unoccupied territory in the south. I think we can manage to help you build villages/cities and support you.

Please come to Algeria. I will send letters to the president and make suggestions. The problem is on your side if you accept moving away from your continent. Planes should be provided by the rest of countries if they wish. We can set donation links with the help of muslim channels on YouTube (authentic ones, if they will) to sponsor the missions to make the higher ups move.

There’s also place for Rohingya muslims of Myanmar, they also should be brought with you here since it’s dangerous there for them.

We share one faith and one pain, we can make it work إن شاء الله.

Indian brothers and sisters, please think about this.

May Allah help you all.

**Edit 1: for the comment below, we have many refugees from poor or war torn neighboring countries: black, red, white, syrian, iraqis.. etc refugees are here in Algeria and no one is deporting them since they are muslims.**

I am working on getting some official statements or at least replies. Please make Dua for me.

Edit 2 : I sent the first letter to the algerian administration, hopefully they read it and answer. I am planning on making phone calls in the coming hours.

Edit 3: I sent a tweet to the algerian president here

I don’t have high hopes for these channels except for One Message Foundation.

I am going to contact my saudi brothers if they can have some statements on this.

1st channel : – One Message Foundation : the letter is sent.

I hate our rulers so much, utterly useless, completely pathetic. I hate nationalist sheeple who are crippling our Ummah.

The pious muslims with golden tongues on media lack the will to lead us.

Some people would rather send billions for the orange man’s family and some cheap fake paintings than to support the yemintes and indians.

I want to help but I am on the other side of the planet, the elites who can actually help don’t care.

I wish the wind of Yemen would blow taking us all muslims out if this earth and let the Kaffirs deal with each other and face the end of the world.

JazakAllah for the compilation brother. Please post in World News

This is one of the reasons I say if have no gifts of wealth or knowledge, the price one has to pay.. Quran 3:118 and people will endowed with strength and wealth gifts who are supposed to help them most of the time can only give dua as help or watch helplessly..

Best you can do now is pray for relief during this holy month, and also share all atrocities on all open internet forums.

With all this and we are still the bad guys pathetic.

I really want to apologize for everything that is happening to you. No innocent person should have to go through this. We stand in solidarity with you and we are praying for you to get relief. The Islamophobic BJP government is indeed terrorizing Indians. (except the Nazis, ofc)
I really hope you’re safe.

India muslims are not being talked about in international media at all . Hopefully influencers will talk bout it . Today Khaled Beydoun posted many tweets. When you follow those tweets, you see all these modi lovers who are living in States, Uk , New Zealand spitting venom against Indian muslims. I don’t get it. You are enjoying democracy and rights and still encouraging genocide.

If only the muslim nations were United…

Well the same thing happened with the kashmiri hindus, and nobody seems to be talking about that so same here… Basically it’s like nobody cares. 😶

My heart broke when I saw all those dislikes even if I posted proof from the Quran and Hadith. I lost my grandfather in a struggle against the kuffar many years ago yet I am accused here of being ignorant. What wrong Did I say except that Muslims should have had a country of their own yet their love for a Hindu majority country is more than their love for a Muslim. I repent to Allah and promise that I’ll never again answer an Indian Muslim regarding matters of faith and Islamic rule. Oh Allah you see how they have hated me when I pointed their own mistakes. I only said what I did to please you. And only through you I seek my justice.

Indian propaganda government is a failure. they can’t feed the poor, development is ever on the decrease, corruption prevails. And these decades they can’t protect their women, children and minorities. What a shame

To ALL of Muslims, specially Indian Muslim!! ALLY up with other Muslim there’s millions of you. Please form an ally with each other and fight against injustice. ALWAYS BELIEVE Allah is with u and ALLAH swt is really enough for you. You have to start uniting. Guys please spread messages like this. At the end, stay in the right path and don’t forget to pray. But ppl in india (Muslims and other religions who are being oppressed) ally up with each other. Yes Muslims in India are outnumbered. But GUESS what, prophet Muhammad saw and all the Sahaba have been in WARS that were always outnumbered. We Muslims have been in war with ppl who always outnumber us. If we die protecting our Muslim brothers and sisters, allying up with the Muslim, dying for the cause of Allah, u will be shaheed. Straight to jannah. Have full faith please. Ya Allah please help all of the Muslims in the world unite up and please help all of us with everything and guide us to the right path and help me achieve and other Muslims spread messages like this. Ameen Ya Rabb