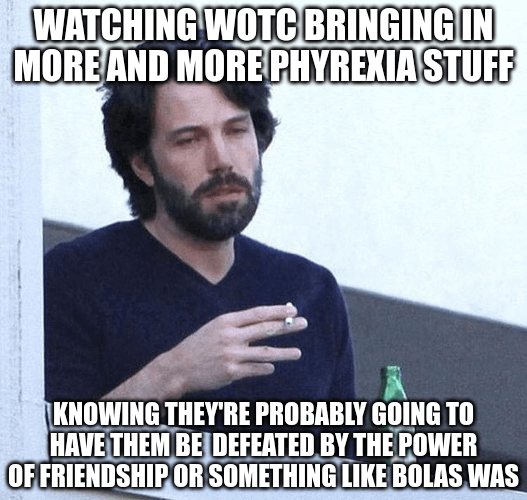 We need phyrexian zombie Urza to wipe the jacetice league and leave 1 of them alive, to force character progression through raw trauma.

/UJ Or honestly anything as long Lhurs is writing it, she could make Jace interesting, it’s unreal how well that woman writes.

Wasn’t Bolas defeated by “It Was Ugin All Along” more than the power of friendship?

She offered to pay for my treatment

Meanwhile Karn just searching for a bomb to blow everything up

Damn I hope the mirrans just make a giant machine that destroys all phyrexians at once. I don’t want that friendship power or whatever. I want giant artifacts.

Wasn’t Bolas defeated because he overestimated how selfish Liliana was and was taken by surprise when she went against him, knowing she would die due to her demonic contract? I’m not sure “Hey, I don’t want to commit genocide anymore and I’m not afraid to die to stop it” is equal to “The power of friendship”.

You know, I didn’t realize until you mention it how bolas’ demise was kinda lame. I just vividly remember how cool the Amonkhet block story was, and how badass he was there

It’s a serialized web story for teenagers. Superhero comics are their number 1 role model and they’re taking notes. You don’t kill your main characters and you don’t have them lose, unless you’re preparing for a payback storyline like in Amonkhet. You’re allowed to kill some random fan favorites once in a blue moon if you’ve already established new heroes to take their place. Rinse and repeat ad nauseam

I’m praying for WotC to actually do the cool thing and have Eldrazi wipe New Phyrexia.

Bolas’s defeat at the hands of his own minions was the perfect ending for him. I can’t judge the prose since I didn’t read the books, but I liked the cards that told the story. The flavor text from Despark is really freaking cool, and showed that Bolas’s defeat was NOT due to the heroes overpowering him or friendship. He lost control of the pawns he thought he completely dominated, and they brought his downfall. It’s the perfect ending for a villain whose entire schtick is thinking he’s so much smarter than everyone and has everything perfectly completely out.

This has been my fear ever since New Phyrexia took over in the first place. And considering how they did the Eldrazi dirty, I think that fear is justified.

I hope every single planeswalker dies.

I hope every single planeswalker dies.

Bolas could literally invoke a mind crushing mental effect in those around him and going off of the old books about Tezzeret, could travel through alternate timelines. Being defeated by two zombie gods may be some form of comeuppance but surely not enough to take him down.

I wonder if Doctor who writers can sue

I really hope that when Phyrexia start to spread across the planes en-masse that Ugin pops up and goes “remember when I clearly told you NOT to kill the Eldrazi Titans? Then you immediately killed two of them??? Sure would be nice to have some monsters that consume mana to fight all these beings made of pure mana right now HMMMMMMMM?!?!!”

/uj the power of friendship is pretty underrated though. Name a problem that was overcome by one person working alone

No no no, it’s the power of ~~magical crack~~ Halo™ that they made into a sword I guess.

I’m thinking with the brothers war set coming out the phyrexians might go back in time and defeat urza rather then mishra losing the war.

-Be Nicol Bolas
-Ever powerful ancient dragon, have failsafes over failsafes, calculating over millennia every possible minor thing that could put you in danger (e.g. the Blackblade)
-be a master @ understanding the mind and behaviour of others
-still be surprised when Gideon Jura sacrifices himself to save Liliana Vess, leading to his demise.

I hope to god they don’t, I’d like to see them become a multi-year threat like they were back in the late 90s

Alternatively what if they just win

They literally beat the eldrazi using channel fireball and the power of being decidedly just friends.

It’s always safe to assume the worst when it comes to the Magic writers.

Lots of people die, except those we are supposed to care about Planeswalker nonplussed.

Bad guy gets away, planeswalker planeswalks. Cool but conflicted.

Eldrazi vs Phyrexia would be cool

Planeswalkers suck and I hope the phyrexians take them all out.

What would the ideal resolution be that would work best for the game’s story development and average player base?

I mean, they made Bolas’s ultimate plan pretty lame. I guess it’s what he’d have done, but he could have easily 1v1ed every planeswalker that might be a threat. It could’ve been a lot more graphic, and probably more true to the character.

I’m calling it now , this is going to have the exact plot of ‘Avengers: end game’. Phyrexians are going to steal the Sylex. And then Karn and Teferi are going to time travel to the brothers war to get the sylex before Urza becomes a planeswalker. Then they are going to go to phyrexia and have a huge unnecessary battle. Then the ‘iron man’ (Karn) is going to sacrifice himself to destroy the phyrexians.

I’m not even really joking, I think they are going to literally just do ‘end game’.

I mean, New Capenna seems to imply the Pherexians are going to be beaten with Angel Corpse Drugs. So. I’m kinda okay with that version.

Reality is what we make it to be. In my reality, Bolas was defeated by a bite in the butt.

Guuuuyyysss, I just wish Phyrexia had some redeeming characteristics, like, they’re just evil and that’s boooorrriiinng. You can’t have an enemy that’s just evil and horrifying! Mirrans should have won anyway, “good guy winning” is more interesting than a major villain victory, apparently. We need more good Phyrexians!

Time traveling Urza from the past.

What I liked about the Mirrodin Besieged block was that the bad guys won.

They could pull an Hour of Devastation style defeat clock reset if they wanted to be extra dramatic (and get some room for a few extra printings of the Praetors). But that’s just kicking the can down the road.

If you want a proper resolution, then my proposal is as follows:

– 2: Via weird phyrexian and/or temporal magic, Yawgmoth returns, the Father of Machines, and ascends to lead his Phyrexians.

– 3: The Praetors find Yawgmoth’s rule to be… unsatisfying… Elesh Norn in particular.

– 4: A Phyrexian Civil War breaks out across Dominaria and New Phyrexia

– 5: All five Praetors (including Urabrask) gang up on Yawgmoth, mowing through his personal guard

– 6: But Yawgmoth is not so easily undone. Every Praetor falls, and Yawgmoth digs into the corpses for parts to build obedient praetors

– 7: Urabrask’s Corpse is trapped, he foresaw Yawgmoth’s ascension and the homogenization of all life, and the reduction even of the phyrexians themselves to a lesser form of life. Teferi implanted him with a Time Bomb, that goes off and returns Yawgmoth to the moment of his death at the hands of Gerrard.

– Aftermath: Phyrexia, now leaderless, is driven back. But some Splinters of Phyrexia remain. Hidden in the corners of a few worlds.

I probably need to work in Karn using the Cylex in there somewhere. I’m thinking a little hostile cooperation between Gatewatch and the now out-classed Praetors, so maybe Karn wipes away Yawgmoth’s guard to open the way for the Praetors to strike? Idk.

Design team wants their world-building to be epic and memorable, but they don’t *want any consequences*. That doesn’t work.

A decade ago, Venser gave his life so that Karn could have a spark. Karn is still here, affecting the story. But Venser is gone. That’s it. It was a tragic sacrifice, and it was memorable. It had an impact on me as a young reader.

Fast forward a decade. Gideon dies in War of the Spark. My first reaction was, “Wow, Gideon is gone?! That’s crazy.” Then in Strixhaven, Liliana is searching for a way to bring him back. Made me roll my eyes. Because bad writing is zero consequence writing.

Rewind a decade. Sarkhan helps trigger the Conflux on Alara and release the Eldrazi titans from their prison on Zendikar. The Eldrazi are a set of three gigantic, alien beings, ancient and powerful enough for Zendikarians tomisremember their names (Cosi, Emeria, and Ula), but still remember their *impact* from ancient times. For two sets, Zendikar and Worldwake, we see factions doing their own thing, with a focus on adventure, living land, and forgotten treasure. Suddenly, the Eldrazi appear, and the Zendikar inhabitants are reminded of how tiny and insignificant they really are. It is a truly Lovecraftian, and terrifying.

Fast forward a decade, a bunch of angsty post-Mending (weak) planeswalkers use the “the power of friendship” to defeat the Eldrazi Titans with a giant green-mana fueled fireball, like some Care Bears shit.

Fast forward to now. We have a set where a bunch of demon mobsters are drinking the literal life essence of a teenage angel in the form of white liquid/power – a substance that is definitely not literal *angel* dust or cocaine, because Wizards wants it both ways. They want it to be epic and memorable, but they also don’t want *any consequences*.

Jin-Gitaxias finds a “new way” to compleat planeswalkers that *keeps their sparks intact*. Translation: The design team can undo Tamiyo’s transformation whenever they want to do it. They don’t want *any consequences*.

The quality of story design has dropped a lot over the last decade. The irony? *That* has consequences.