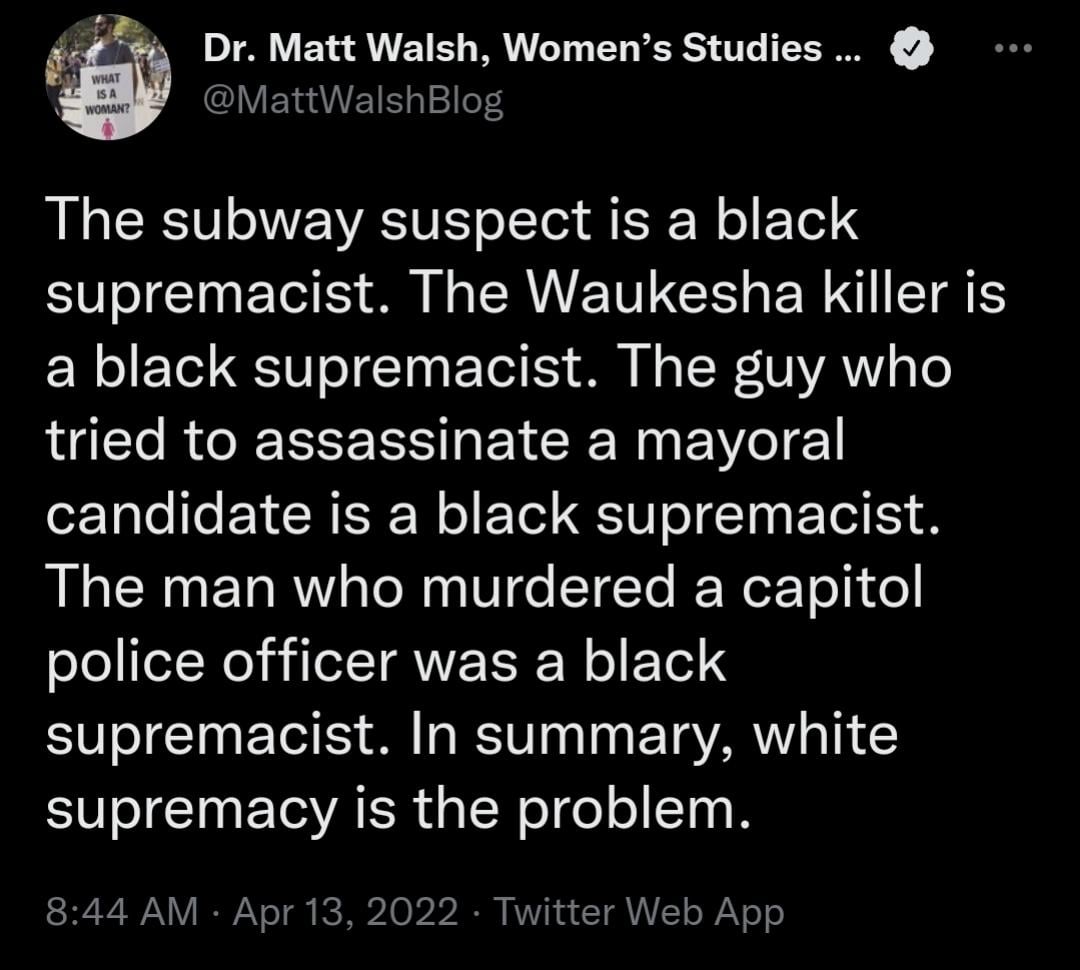 Matt may want to check out the scoreboard…

31 replies on “Matt may well want to examine the scoreboard…”

It’s sad to think that a brain aneurysm will take this man’s life within the next decade due to all the mental gymnastics he has chosen to routinely perform.

what’s a “black supremest?” someone who thinks they shouldnt be subordinate to racist hate? or just any black person with a gun? 🙄

Any supremacy is the problem

At least Fash finally admits that supremacy is a problem. He conveniently forgets four hundred years of it.

It’s so embarrassing that he calls himself “Dr.” with only a high school education.

Nothing against folks who don’t go for higher education…but this caveman is no doctor.

Oh no, there were 4 deaths caused by black supremacy, surely there isn’t that many caused by white supremacy… Right?

Yes Matt, ethnonationalism is in fact a global problem and needs to be wiped out…

How about any racial supremacy is bad?

Couldn’t read this, dog whistle was too loud.

Tweeting in defense of white supremacy; he’s not even trying to keep the mask on anymore

I didn’t know that Republicans were that into cherry picking, I thought they employed immigrants to do that job.

Or. Alternatively. Anyone thinking they are supreme to others is wrong.

That “what is a woman” sign, doesn’t really help him.

Isn’t “dr.” a protected title and you can’t just falsly claim.it like he did here?

literally nothing is known about the suspect other than he was black, and that’s why you’re a racist matt

The subway shooting suspect wasn’t even a black supremacist. Matt saw the headline that he he had posted racist videos and didn’t bother watching them; the shooter said shit like how black people deserve to die.

>”In most of the videos, however, James seems to express his disdain for Black people—often calling them “cattle” and racial slurs—and talks about his desire to “kill people,” even describing himself as a “prophet of doom.”

>“[N-words] should be wiped off the planet, even though I am one,” James says in one video.”

Qunitez Brown is who he referring to who shot at the mayoral candidate in Louisville, KY. Brown was an activist and journalist intern who seemed to have a bright future. He also appeared to be having some severe mental health issues since last year when he disappeared for a while. Of course Matt Walsh makes some racist ass take while ignoring the reality of a situation that is tragic on all fronts.

This is just like those who say that far-left and far-right extremism are equally bad (or that leftie extremism is worse) when statistically speaking right-wing terrorism has caused 83% of politically-slanted terrorism fatalities in the U.S since 2015 (O’Harrow, Ba Tran, Hawkins 2021). Or that femcels and incels are equivalent. Femcels are hilariously pathetic but AFAIK haven’t been responsible for nearly as many fatalities (if they’ve killed people at all) so you can’t exactly present them as the same thing but with the genders swapped. They’re not, one side is lame and the other is actively dangerous. Same applies to racial supremacy. He’s cited a whole three attacks here. Except that how many black people have been shot just for being black in recent years? How many mosques or black churches have been targeted? How many times have white mass-shooters have left weird racist manifestos behind or followed people like Walsh and Shapiro on Twitter? A lot. It happens a lot. The death toll is incomparable.

I’m not one to believe that members of minority groups can’t be hateful but you’re equivocating dozens of dead on one side to hundreds, if not thousands on the other.

As someone who has studied statistics and data science, this man is a human turd.

“The man who murdered a capitol police officer was a black supremacist.”

Are they still on that antifa jan 6th nonsense?

black supremacy is a real thing(bruh) but damn this guy doesn’t care, he just wants excuse for white-supremacists.

also there were black capitol raiders?

Quite the smooth brain take there, Matty

Matt, the Brooklyn suspect hates Eric Adams, hates the homeless, and is a misogynist. This is all public. Swing and a miss.

ok, but the subway shooter is NOT a black supremacist. he’s black, but he also thinks black people are inferior.

did matt even read anything about this guy? it literally said he had a youtube channel where he talked about how much he hates black people. i guess matt just saw that the shooter was black and his pea brain couldn’t handle anything past that.