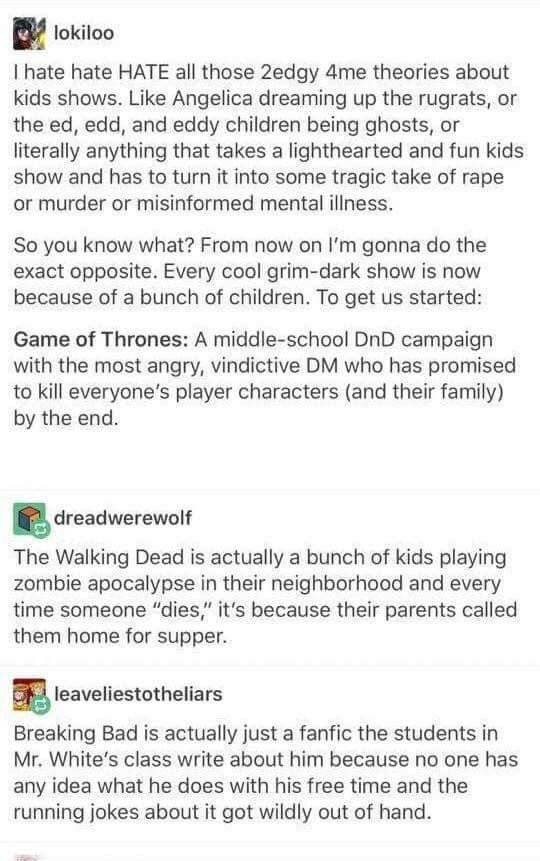 29 replies on “insert idea in this article*”

These are so much better than the other way around

The witcher show is just what a nerds housemate learned from overhearing the nerd binging the game on their PC.

Game of Thrones literally started as a story about sickly hobby store pet turtles (it was The Past IDK shit was weirder then I guess).

My least favorite flavor of fan theory is the coma theory. The idea that the events in the movie/show/game were all a coma dream of the main character. My main issue is that it adds literally nothing to the actual work itself. All it does is subtract from the worldbuilding, character growth and development, and pretty much everything else by just chalking everything up to “it was all just a dream”. Notice how i also never mentioned a specific show or game or anything that has this theory, well that’s because this theory can be applied to literally any work of fiction in existence. The coma theory is nothing but a hollow, interchangeable attempt to tug on your heart strings

Tl:dr the coma theory regarding any work of fiction defeats the point of it being fiction

Stranger Things: Four particularly imaginative boys play a made-up game where they have to fight a monster, inspired by the horror movies they like and Dungeons & Dragons. One of them gets sick early on and isn’t able to play with them anymore, so the three other kids invite another kid from their school, a shy girl going through chemotherapy, to play with them instead. Eventually their game gets so elaborate and impressive story-wise that they rope in their older siblings, then some of their parents, and eventually even the police officer dating the sick kid’s mom, into their game. Much fun is had for all.

24 is about kids playing with their Rescue hero toys and making up ridiculous action scenes every minute as they play with their main characters. Chloe and her sidekick, Jack Bauer.

I read the theory that Adventure Time is a DnD campaign between a father and his son (and his son’s friend). The show gets more mature cause the kids grow up.

I fucking love the breaking bad one

Symphogear is a story made up by a bunch of kids from very religious households, who try to unite all their different religions in a single narrative. One is also a band kid, and another loves magical girl anime.

My high school friends and I made this whole backstory for one of our english teachers because every time we found something new about her, it was something unexpected. She thought it was hilarious, and I’d 100% see the breaking bad one happening.

Warhammer is just a bunch of nerds playing with their toy soldiers.

Succession is some preteens RPing “office” on a Facebook group and getting way too excited about the swearing.

I’m very fond of the purgatory theory for Ed, Eddie, Eddy because it’s fucking hilarious to see their constent futility through that lense. It definitely fits with the theme.

I’ve always said that the various forms of “coma” or “just a dream” type theories are really lazy. You don’t have to even try, because any inconsistencies can be hand-waved away; _”Of course some things don’t make sense. Dream logic is weird like that.”_ Unless there’s some really big smoking gun clue, or WoG says it’s true, I just assume those theories are wrong on principle, so I 100% support using it in a way that undermines dramatic shows, rather than trying to make wholesome ones have a “dark twist”…if for no other reason than that it helps to show people how much it cheapens things.

John Wick is just some iamverybadass teenager saying what he’d do if someone hurt his dog.

Stargate is just the visualization of a sci fi RPG being played by two nerds and two jocks. They only have one afternoon a week so each adventure has to be over by the end of the session.

Wagon Train (1950s Western) is actually an educational RPG that the students keeps getting bored with, so they keep inventing increasingly dramatic side quests

The DnD dungeon master theory would’ve been 10000x better than the actual ending of game of thrones. I wish they went with that instead

Buffy the Vampire Slayer is when the shy nerd hesitantly invites her new cheerleader friend to her weekly Hunter: The Reckoning game and it turns out she’s *really* into it.

The Shining is about a lonely dad who wants to spend time with his wife and son, but can never find them in the big hotel they’re all looking after.

Then you have Adventure Time, where the “akthually the show takes place in a post-nuclear holocast wasteland, and all the weird characters and magic are just the result of the radiation and mutations” crazy theory is actually **100% canon** and a main plot line of the entire series…

Ninja Turtles is just the day dreams of a bored farmers child. All the characters are based on animals from the farm.

The reason it takes place in the city is because it is exotic and exciting to this country kid. This also explains why the sewers are clean and no one ever takes the subway.

Torchwood: The Game of Thrones kids are in high school now and the GM is doing an edgy, grimdark, Sci-Fi — except his best friend is wise to his antics now and frustrates him by putting all his stats in “seduction” and making the GM roll for it.