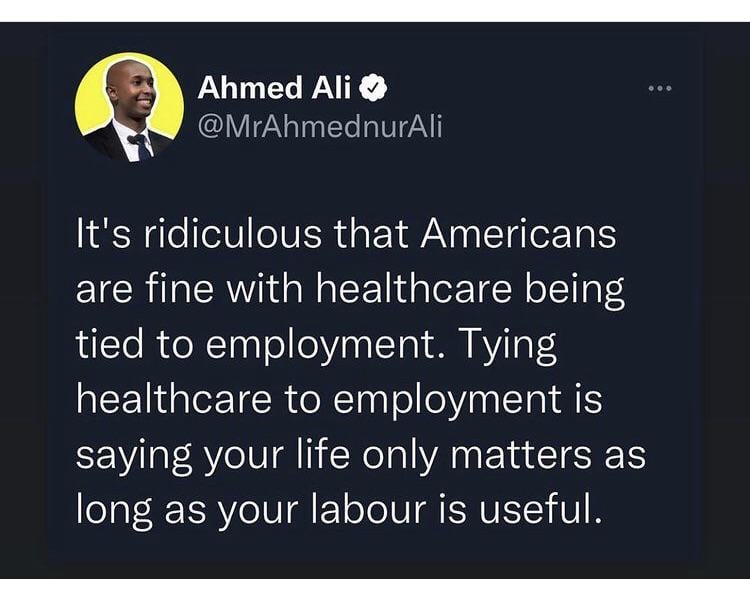 I’m not wonderful with it! Universal health care > task healthcare

30 replies on “I’m not wonderful with it! Universal health care > position healthcare”

For those who say “ we can’t afford it “

[we 100% can! if we have 700 plus billion to give to the horrible military complex , we can easily give it towards important things that people truly need for the betterment of society.](https://youtu.be/Qi0HGYftyLQ)

“the richest country “ but millions of people are still suffering/struggling. Make it make sense.

We have to fight for a better life for all ,and be loud about it.

We need to By pass the Rich / politicians muscle ( police ) and take the fight straight to their faces & [door 🚪 steps](https://youtu.be/MCMoTm4TAwE)

We all deserve better than this y’all.

I am completely not fine with it! I think the problem is that the people protesting are usually people who can’t actually do much individually to fix it and there doesn’t seem to have been a widespread organization or anything to try to get universal healthcare in place.

This is why Obamacare exists

I’m NOT fine with it.

Tying it to your employment isn’t bad per se.

Here in Spain it’s tied to employment, so everyone that works or gets a pension automatically is covered for public healthcare.

However, besides that, it **also** covers unemployed citizens, spouses, kids under 26 and so on.

We also cover by default all medically necessary help for any residents from any of the other 26 EU countries. So a German can get wasted in Ibiza and still get medical help after taking too much drugs, or a Swedish woman can come on vacation to Spain and have a free unexpected childbirth here. Everyone gets the care they need.

So in Spain this system works well, because it makes sure that all citizens get public healthcare regardless of work-status. Foreigners living in Spain will get help as long as they are working and tourists get all their necessary help so they can come to Spain worry free.

This happened because they drove wages down for forty years and it’s last hammer they have left.

There’s literally nothing else: they privatized pensions, they don’t pay shit, so the only reason you’re staying is to avoid paying COBRA.

Well that’s kinda of the normative tactic. They tied religion and republican together. Many of them vote for laws/politicians who openly fuck them over because they use scare tactics to make them think someone’s going to take their guns and Jesus away because they got universal healtcare.

So it’s working as planned.

Only an idiot would think we’re all fine with it. Congress is totally OK with it as they’re getting millions from insurance and healthcare companies. We’re not fine with that, either, but there isn’t shit we can do about it, short of a revolution, since the SCOTUS legalized political corruption with Citizens United.

Correction: your life is only useful if you work for a very large organization.

Small businesses and their employees get shit on throughout this entire ponzi scheme process.

Even more so, a lot of employers will pay you less because they offer “great benefits”

The people who are fine with it are just like people who get bullied and scared into voting against unions by their bosses. Better the devil you know… Sad state of affairs.

Saw a post that was contrasting the fact that we pay a significant part of our income to private Healthcare but cringe at the notion of paying that or less for universal health care. 🥴

I am lucky enough to have my employer pay for my insurance completely. This would probably make my taxes go up, and I would absolutely take it in a heartbeat.

Now I understand we can afford it at our current tax rate, I just don’t believe we would get it through the government without an increase. I would gladly take the small paycut to switch to single payer, and should be able to leverage my boss for a raise since he would save an incredible amount of money from this.

Of course the healthcare industry pays a lot of money to keep this from happening, and so do other very large companies who want to be able to leverage this against small companies who can’t afford to insure their employees. Hopefully if we keep fighting we will get there, and then can shift this focus to other things, like keeping up with the rest of the world in paid time off.

Things are still expensive with insurance

That’s honestly one of the things that astounds me about America, never understood how people could put up with it.

Imagine that, a country built on slavery only valuing people based on their capacity for labor.

We collect enough in taxes already and have systems in place to provide insurance, affordable homes, education, and retirement to citizens. But instead of dividing these benefits among all citizens in parts they give all the benefits at max value to one select group aka active duty. Every active duty person I ever met said they joined the military for the benefits.

If we started giving benefits like healthcare to people it would reduce the incentives to join the american military.

None of us are fine with this. But as long as americas major lobby power is from healthcare/insurance and americas worth to the world is it’s military power. This won’t change.

Not at all fine with it. The insurance companies are fine with it because they get to charge the group rate and make money hand over fist. They’re also fine with it when you elect to pay for COBRA if your employer discards you one way or another. They’re also fine with there not being an adequate social safety net as it drives those of us who need the coverage because disabled/chronically towards them because the other option is barely feasible (I know, I’ve been uninsured and it’s hell).

And it’s completely at odds with the so-called American Dream and the old “free markets breed innovation and vertical mobility” narrative. People can’t start their own business if they can’t afford to cover non-employer subsidized healthcare insurance for their family. It even decreases horizontal mobility because if you switch employers you might get kicked out of the network handling all your healthcare, which is an especially big issue for those of us with chronic health conditions and disabilities.

Health care being tied to employment is a direct result of WW2. Wage increases were limited as a means to combat inflation so employers needed a different means of attracting employees.

It’s 80 years later. We can do away with this archaic bullshit now. But of course one side of the political sphere clings to tradition like it’s law.

That’s exactly what those in power are saying.

So much money poured into the military. For crying out loud! How much money does it need??

I needed a root canal done immediately, my tooth was killing me (this was last year) and for one damn tooth (molar) it was gonna cost me $3,000!!! I thought my insurance was going to cover me since I have dental. HELL NAH! They don’t cover molars!

What kind of fucking nonsense is that shit?? I was in agony, I wanted to fucking die and I said “pull that bitch out” now I’ve got an empty space.

This healthcare system is a joke!

I’ve got a younger brother with diabetes. One of the devices he uses to keep him in check, insurance found a cheaper one and it’s not as accurate and they switched him to that one.

They did the same thing to his insulin, one that he’s been on for 2 years and they find a cheaper one and gave him that one. It was not fun for him, he was in the hospital because his body was not use it.

They refused to switch back!

Our health is a damn game to these people.

I recently posted a Tiktok about a private hospital writing off my deductible after my insurance paid $11k for an out patient hospital visit. I deleted like a dozen comments of people calling me a mooch for having “someone else” pay for my medical care.

Like, it’s okay for two hours in the hospital to be enough to bankrupt someone. But heaven forbid the hospital only get $11k for it.