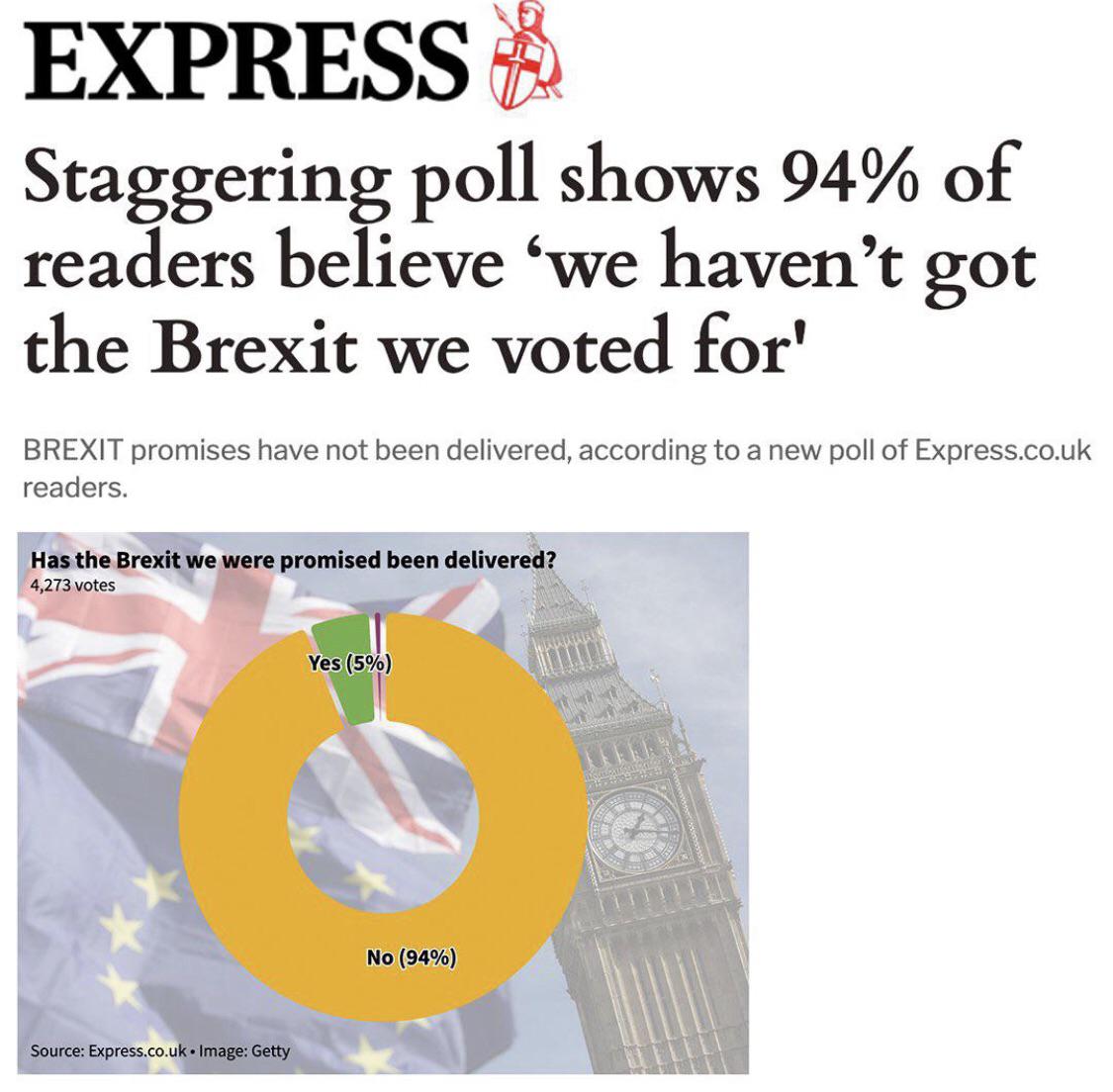 I realized it was undesirable, but not this lousy

23 replies on “I understood it was poor, but not this terrible”

94% actually got the Brexit they voted for.

They were sold a total bill of goods that everyone with any sense knew was a total load of BS. The people pushing it promised that essentially nothing would change, because Europe was weak and would simply agree to whatever to keep the great UK because they were so important. Oops.

They got what they voted for, it just wasn’t what they were promised.

Conservatives took their voters for a ride? Color me shocked

Staggering: only to EXPRESS readers.

You voted for “Leave the EU”, and that’s as much detail as you ever gave a shit about.

Not even “As per the published agreement, revision 27”, nothing.

Just “Leave”. You got that. We left. The consequence is on you.

Because everyone else TRIED to warn you, time and time again, that the Brexit you *thought* you wanted wasn’t even a good one either, and that you weren’t ever going to get even that.

Part of democracy is that you’re liable for the consequences of your own choices.

Maybe you all need to vote for it again and see if you get it next time? /s

It’s like all the stories you see on Reddit of some A-hole telling his wife he wants an open marriage because some secretary at work flutters her eyes at him. The wife reluctantly agrees, the secretary turns him down and the wife gets lots of interest and finds a new partner. He ends up living in some hellhole bedsit, trying to convince everyone that it was worth it so he can go on the odd date with a cash-scam hussy.
It wasn’t perfect but it was the best you can get.

I’m not British, but I do work with team members who are, and according to them it seems like the popular opinion on brexit is that of buyers remorse.

It’s because nobody knew what Brexit was at the time of the referendum.

The Brexit campaign was lead by a series of factions all saying Brexit would be something different to different demographics each promising them exactly what they want whilst someone else promised entirely the opposite (It was simultaneously 350mil that we pay to the EU a week to the NHS and no change in value to the EU subsidies recieved by farmers, it was both a closure of borders to end the flood of “uncontrolled immigration” and an opening of borders to make it fairer and easier for non-EU citizens (like Indians and Pakistanis) to get visas rather than the EU getting preferential treatment. It was no additional customs controls between Northern Ireland and the rest of the UK and no hard border or additional controls on the island of Ireland).

Every campaign promised different “Brexits” to different demographics to get them to converge on this single issue and, with no coherent plan or definitive campaign, the remain campaigns couldn’t challenge this properly by pointing out the hypocrisy.

Now when (entirely unsurprisingly) Brexit has been a disaster no Brexit voters want to admit blame and accept it was because Brexit itself was a bad idea. Instead it’s because they didn’t get their individual idea of Brexit (which definitely would have been great /s).

I just hope it’s a lesson for future single issue referendums that there has to be a clear defined choice between two things. Not a choice between a status quo and an infinite number of hypothetical “others” all badged under one name.

Edits- (spelling, grammar etc) Also let’s be clear this was deliberate. The UK had not long fought the Scottish independence referendum and (the pro-Brexit anti-independence) UKIP, Tories and (some of) Labour knew the best line against independence was to challenge the white paper and point out its flaws and how independence wouldn’t work. They equally knew if they didn’t put forward such a paper that no one could do that to them and they could promise all things to all voters with impunity.

They voted for leaving the EU to have autonomy, but still wanted to somehow keep the benefits of being in the EU for trade, borders, etc.

They got what they voted for, most of them that voted for it just didn’t understand that they couldn’t have it both ways.

I wonder how many of them would agree that this is the brexit they were told they would get.

Don’t concede that you were wrong or anything

The “leave” voters were voting for the Brexit the “leave” campaign promised.

One where the UK would get all the benefits of EU membership, but none of the downsides.

Their people would still enjoy the openness of the European open market, freedom of travel for UK citizens, and nothing that would harm their ability to travel and live throughout Europe or enjoy goods from around Europe and the rest of the world casually. . .

They were sold a fantasy reality that combined the best parts of nostalgic old Imperial-era Britain and the modern-day EU Britain, and told they could have that for the low, low price of one “Leave” vote.

. . .and the Remain side, and neutral commentators and analysts, pointed out that the Leave side was making absurdly unrealistic promises and couldn’t do everything they said. They ignored that, because that wasn’t what they wanted to hear. Now they’re angry that they’ve got exactly what the Remain side would happen, and blaming the EU for it, or their own government, or really anybody but themselves.

It’s not hurting they people it should be hurting?

That’s because they voted for the Magic Brexit, where they get to keep all the benefits of being in the EU, but they have more money from somewhere and the foreigners who drive their trucks still drive their trucks but aren’t in the country somehow.

Seriously, they need to apply to rejoin.

The thing about voting, is all you get is what was on the ballot.

“Should the United Kingdom…leave the European Union?”

Tories are now commiting an all out war on the Civil Service which will no doubt pave the way for how its the Civil Service’s fault for the COL crisis (including teachers, NHS and people on benefits)

Then I imagine our employment rights will be next.

The thing is, and this is what pisses me off the most, people who voted Brexit didn’t know what they were voting for BECAUSE THE DEAL WAS MADE AFTER BREXIT. They voted brexit because they’re either clueless or racist.

It should be the global conservative motto by now, actually