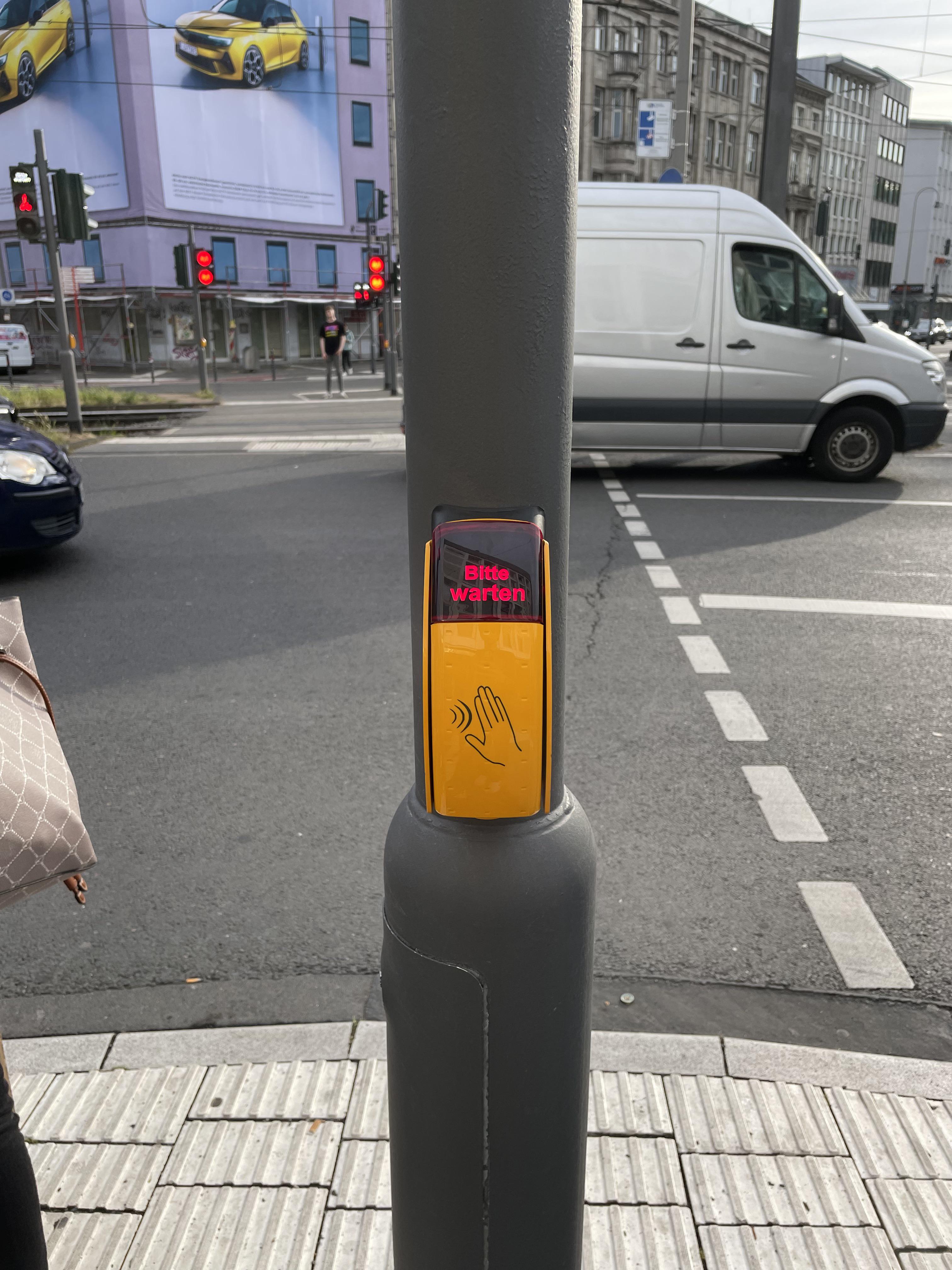 How do these points perform? Do you contact them or do they get the job done immediately? I constantly wave my hand on them but was a short while ago explained to it does absolutely nothing. Uncovered in Koeln.

42 replies on “How do these items do the job? Do you contact them or do they operate routinely? I normally wave my hand on them but was lately advised it does practically nothing. Found in Koeln.”

the force you use to have…

Really, you have to bonk it once

Just press the small button on the underside, they’re less grimy and work reliably (they’re actually there for blind people I think).

You touch it once, the light turns on. Does it do anything? Who knows? There’ll be green eventually anyways.

Touch every place until the light turns on

Depends. Some cause that the light turns green faster, some don’t do anything at all but are only there to appease the waiting folk, some are necessary to press for the light to turn green and some only trigger only the sounds that help blind people.

Its true. Waving your hand does nothing. Pushing the button on the other hand..

Heh, “Macht eh nix” is a very common answer. Some stop lights react to them, others don’t. So just touch it if you don’t exactly know if the pedestrian lights comes on in a fixed shedule or not

LPT: there is a button on the bottom side that works better than pushing

I’ll abuse this thread for a quick survey: fellow countrymen and -women: How often do you see people trying to press the similar looking audio-thingies for the visually impaired, wondering why those don’t make the light turn green? 😀

(Why do you ask, just push it. It is a button. It wants to be pushed. Do you not want a happy button? And if it feels like there is no button hit hit with you fist for a good measure! BONK IT! YOU WANT IT, THE DEVICE WANTS IT, THE DESIGNER WANTS IT, SO WHAT DO YOU DO? YOU MUG…. ehm BONK THEM!)

Not sure whether they are all active. I suspect that some are just on a time cycle.
(It would be a great experiment on human compliance)

This particular kind does *not* have a button to push I think (at least not the big yellow side pictured), so I totally understand the confusion. Since none of the other comments pointed it out, I will use the opportunity to share my superficial knowledge. To be honest, this is just how I imagine it to be, I have never actually researched it or found reliable or even any sources at all.

So this kind doesn’t use a button, yet it can sense when a hand is there. Whether it is via detecting the change of a capacitive load (much like the technology behind one type of touch screen) or detecting body heat from the hand, somehow it registers it (even through thin gloves, I haven’t experimented much) and reports the request to cross this particular section to the circuit controlling the intersection. It displays that by blinking “please wait”, but what the controlling circuit does exactly is highly dependent on the programming and thus of the needs of that particular intersection.

Allow me to take a detour via this topic, because I think it’s super interesting and gives a deeper understanding of why these buttons exist at all.

When programming such an intersection, meaning deciding the phases and timings for all the lights, the highest priority is safety. This is immediately followed by maximising the throughput of the intersection: Imagine starting out with a primitive programming of a simple 4 way crossing, wanting to just make sure there are no accidents. First the horizontally crossing cars could get a green phase for some time during which everybody else has to wait. Of those the ones turning right can just drive without obstructing anyone, but those turning left have to cross oncoming traffic. So there is usually an extra lane for those turning left that will get green in a different phase. But that phase cannot be at the same time that the vertical straight and right turning cars drive either, but we can lump in vertical and horizontal left turners without problem; so we have at least 3 phases.

Oh, and now there’s pedestrians! Shoot, we cannot conveniently put them into any existing phase without obstructing traffic. For smaller intersections this is not a big problem, there are usually warning lights telling those turning right to watch out, but for bigger or more complicated intersections we want to be on the safe side. But making an extra phase for pedestrians to cross is very expensive, it costs a lot of time while all other traffic stands still. So if there’s not enough pedestrians to make an extra phase for them every cycle, let’s only add that when there are actually pedestrians that want to cross! And that is where the button comes in handy.

Of course, we cannot stop all other traffic right away. The button only tells the controlling circuit “add a pedestrian phase at earliest convenience”, so sometimes they have to wait quite a bit. Humans are not good at waiting without knowing how long it will be, and especially bad at waiting when they don’t know whether their action already kicked off the thing they are waiting for. So they are given a blinking light to tell them “Thanks, we got it! Please wait until then…”, which works reasonably well.

Some intersection light designs are like the one I described, some intersections may only face very occasional cars crossing from one direction and thus be programmed to show green to the other, higher frequented one by default, and only switch when some other detector senses waiting cars.

Yet other intersections might be so busy that they require a pedestrian phase in every cycle, making the button essentially useless. But if you were to remove them, people would suddenly get anxious whether there is any use to waiting at all. So I can well imagine some programming where the button does nothing but give feedback to pedestrians “We hear you, a green phase is coming up, please don’t just run onto the road” but not actually do anything to the programmed cycle.

The ones with a screen are the ones which you touch and there are ones without any screen/ are all around yellow, they will change the traffic lights automatically.

I recently learned an expression that is perfect for those questions: Jein

Sometimes it makes the light green, sometimes it turns green without pressing it. Sounds confusing, but many people are more confused when these things are not there so, at least i think thats the reason

okay, so hence the question how the button works was already answered by others, can we please talk about the weird transporter behind the button?

It’s a virus dispenser. You get to rub it for a few seconds and share your germs with your fellow citizens.

It works like a touch screen – touch it and green light will come for you. For blind people there is also a little button underneath, normal people normally dont notice.

Depends on the model.
Some you have to press so the traffic light turns green.
Others are vibrating when it’s green, indicating that it’s safe to cross for blind people

1st push the button 3 times, then pause, now push it 2 times and finally push it 5 times. Once you know the combination it is easy.

Usually the have a little light (the “Bitte warten” in this model) that turns on after you press it. ( I personally prefer the models where you have to push the button maybe half a centimeter.
Also the models with a black and metalic part ontop have a buttin on the lower side to activate a vibration if the light turns green (fir blind ppl).

the ones in Berlin have a button underneath

Now it will be crazy for many of you. Try, if there is a button under this yellow thing you also can push.

some of these are actually just for show because the pedestrian traffic light would turn green anyway without touching these things … in this cases they do nothing execpt for providing some sort of feedback, so it seems like you accomplished something with your touch

Some work with touching, others with a button and there are also some who work with waving or just standing near them.

In seriousness a little hard press and it should say “ signal kommt “ and then you gotta wait . In many places you have to compulsorily press that to get a green light and in some it’s inconsequential

It usually doesn’t do anything,but is there for the blind people

its working. even the ones without pressable button. and everytime, i do it, i think about how can this work. maybe there is a temperature sensor inside and detects the changing of temperature triggered by the hand. that could be the explanaition, why in winter it takes longer with gloves then with plain hand. but if you rubber on it with gloves, it goes faster.

They usually don’t work because they’re kinda old and no city has money to replace/repair them. Everyone ignores them here.

Press it one time. Never seen it that it was faster with multiple presses.

There is orten a Button on the underside for blind people. It gives you a little Feedback

Ones that don’t work are those at junctions. They don’t work as everything is on a timer.

Ones that do work are those at pedestrian crossings without junctions. It works as there is no timer, and you need to be able to stop traffic ad hoc.

I push the button on the bottom 👍🏽

You have to touch them, but only if they have the hand picture on them. If they have the three black dots on them its only for blind People to enable the sound, the lights themselves turn green automatically