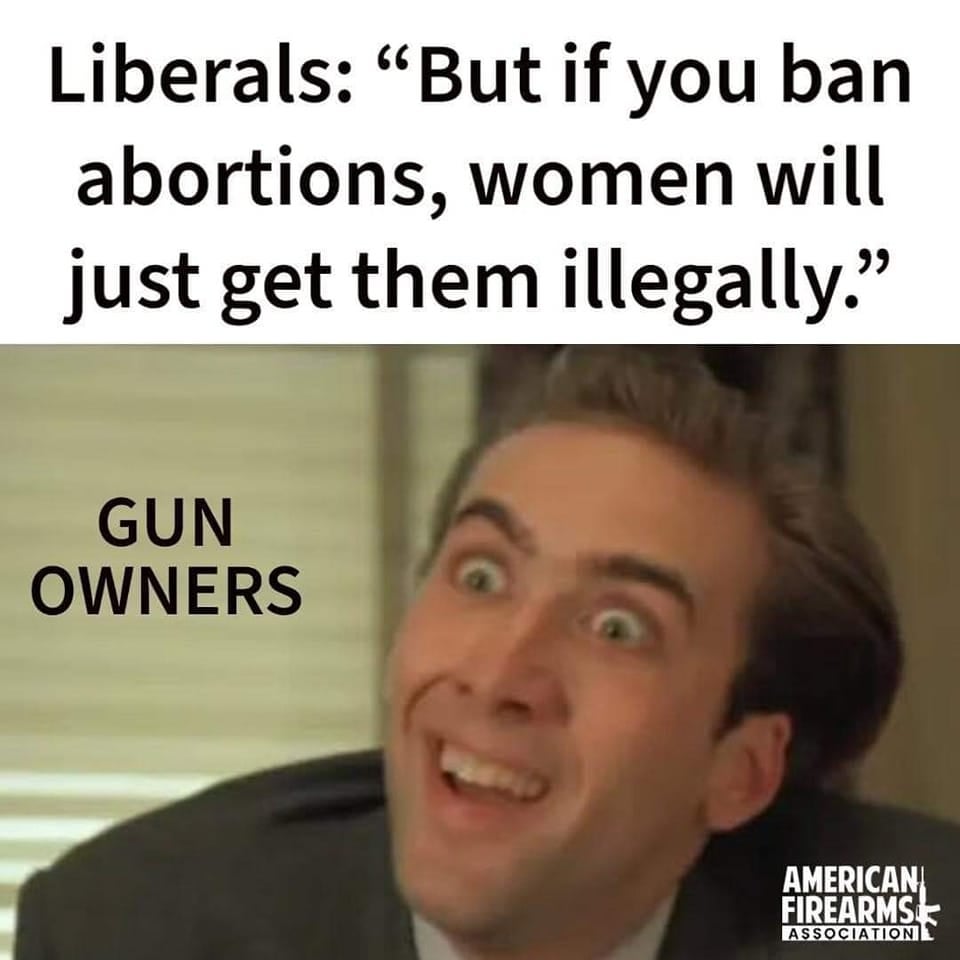 42 replies on “but grandma continue to wants abortions banned”

That argument is great….as long as you don’t think about it.

Abortions are not a material item that can be smuggled between states, to Canada, and to South America. Guns are finite products if we stop making them. The real problem is how many of them exist and manufacturing processes such as 3d printing.

And these faux moral police only care about globs of cells, embryos, and fetuses. As soon as you’re born, it’s “fuck you, healthcare, food, water, and shelter are privileges that you buy with money, not human rights.”

I mean I wouldn’t want guns to be banned anywhere, just restricted a bit so it isn’t that easy to get one and need proper training so that people who really want one for a good reason can still get one

“Okay okay…abortions for some, guns for others, and tiny American flags for everyone!”

Grandma only utilizes the theoretical part of the argument without looking how countries with illegal abortions increase abortion rates and just makes em more dangerous, while gun regulation has been the most consistent solution looking at other countries. It makes sense. A gun is a tool that gives someone power. An abortion is an optional thing that would have a steady demand regardless and the thing that’d reduce the demand would be comprehensive sex ed and better contraceptive access.
But no, we have to deal with these old fucks fear mongering about “child grooming” over the vague concept of sexuality, putting in power politicians who have very strong allegations against them of doing the same thing they fear.
These old fucks just want an abstinence world back, something that is counter to how time works. Especially because of the aforementioned politicians.

So kill women to stop them from getting abortions. FUCKIN GENIUS

We have a whole medical industry that is perfectly well suited to “regulate” abortions, meaning that abortions can be performed selectively and responsibly according to professional scrutiny and oversight.

Guns also need a regulatory framework to make sure they are used selectively and responsibly.

“If you outlaw abortions, only outlaws will have them.” – Al Franken.

But I probably don’t count. I’m too far left to want to ban guns.

I’m very upset that they used Nicolas cage for this

People buying guns illegally aren’t at great risk of dying if they buy one. This argument is stupid as hell.

How does this work? Are wire coathangers going to be no longer carried in stores?

You could also say those two things are the same, for the sake of the argument…the U.S. is the only country on Earth that not only gets close to 1 gun per capita, it overcomes it (1.2). Now, I don’t know how many people don’t use condoms, but..

Also: you can have guns with gun control. Just have to pass through some lengthy processe-..uh, oops, guess what do people that want abortions have to go through basically everywhere?

The left: “Gee, wouldn’t it be nice if we had less mass shootings committed with legally-purchased guns. Wouldn’t it be great if we made it harder to purchase the weapons used, and had another set of charges to throw at people who commit these crimes and are caught?”

Gun nuts: “HELL NO I ***NEED*** AN ARSENAL FUCK YOU I’LL JUST BUY IT ILLEGALLY AND START A WAR IF YOU TRY”

It’s true. I just deposited some semen in my girl today. I’m hoping for a Glock in 9 months.

While not thinking the government is the right tool for ending abortion, I definitely was people get a grip and realize they shouldn’t murder babies.

How did our society fall so far as to kill 63 MILLION children?!?

Can’t tell if this is pro gun-control or anti-abortion, it can’t be both otherwise it sorta contradicts itself

Funny how they continue to liken regulation with banning. You know, kind of like how abortions are regulated now? You can’t just wake up and decide you want to provide abortions. You have to be licensed, trained, and insured. Unlike gun owners in many states…

Can’t speak for every progressive, but I personally don’t want guns banned. I want people to have to have some basic fucking education on how to keep and maintain their guns safely. I want gun owners to have some knowledge on what the fuck they’re carrying, as it can be dangerous in anyone’s hands, but especially uneducated people’s hands.

No leftist ever claimed to be a liberal *cocks rifle*

Except very few people actually want to ban guns. They just want them registered and licenced. Like our healthcare system is.

Except very few people actually want to ban guns. They just want them registered and licenced. Like our healthcare system is.

Guns have more rights than females in this country. Sigh.

No, if you ban abortions, women will get them where they’re allowed.

Which is also a gun control issue.

Almost like we just want guns to be harder to get. Very few people arguing for zero guns.

Abortions on the other hand…

A means B
Vs
A means less B.

Both bans fall into category 2, but it’s still a numbskull comparison, because the “customers” for guns are vastly more voluntary than those for abortions. Abortions are *needed healthcare* in many circumstances, and when they cross the line into “elective,” they still are done to mitigate personal harm, rather than perpetrate societal harm.

Sally isn’t robbing a bank because she got an illegal abortion. Jim isn’t buying a gun because he would like a tumor removed from his body.

i can think of a hundred ways to terminate a pregnancy with common household items or no item at all, i cant think of how i am suppose to put a gun together, even a shitty one with shit i have in my house

One of the biggest differences including several already noted is that there is not a serious national discussion from the highest level and number of federal legislators that they promise without a doubt that they will ban guns.

We don’t have that with abortion. They’ve made it abundantly clear that is the goal and those jackasses who are the cause of unwanted pregnancies in the first place will make that happen when they eliminate the filibuster if enough people don’t show up this November to fight it.

AOC, Omar, Cori Bush or whoever else may have said or insinuated something about banning guns (not that I’m aware of that happening at all, but using them as a random example) are barely a blip of what actually comes to fruition in the House, then when it does, it almost never stands a chance in the Senate.

The rabid Republican misogynist hypocrite control freaks *do* have that volume in both chambers.

Being from a country without wide access to guns makes America look completely and utterly insane. It’s crazy that the UK’s (apparently) top ally is a country where quite a lot of people own multiple firearms and have no public healthcare – Despite speaking the same (sort of) language, culturally we are so so far apart.

Totally not a false equivalence at all. Wanting to make sure women have a safe procedure instead of resorting to back alley abortions that greatly increase risk of hurting her is 100% the same as just wanting everyone with hands to be able to own as many guns as they want.

That is why I support both legal abortions and guns (and drugs). PROHIBITION DOES NOT WORK for anything. Ever. It never has.

They’ll get them illegally and a lot less safely.

Once again with the gun owners saying we want to ban all guns or rifles or whatever. Seriously such a small minority actually want that, we just want stricter gun laws and gun control making it harder for psychopaths to get a hold of guns why is that so much to ask? Are these people afraid they wouldn’t be able to get a gun after that because they’re batshit crazy?

“Son, you were suppose to be an accident.. but then karen and kyle stepped in and made it impossible for me to live a better life because i wasn’t ready”

I don’t want guns banned… I just want everyone who owns one to be required to get a license and register… like abortion doctors.

So is this not kind of a right-wing self own?

I always wonder where they think criminals will get guns if there was a nation wide ban. Do they think they’re gonna start a manufacturing plant and put out AKs or something?

These people never understand that gun bans are specifically to avoid mass shootings, which are carried out primarily with legally obtained firearms.