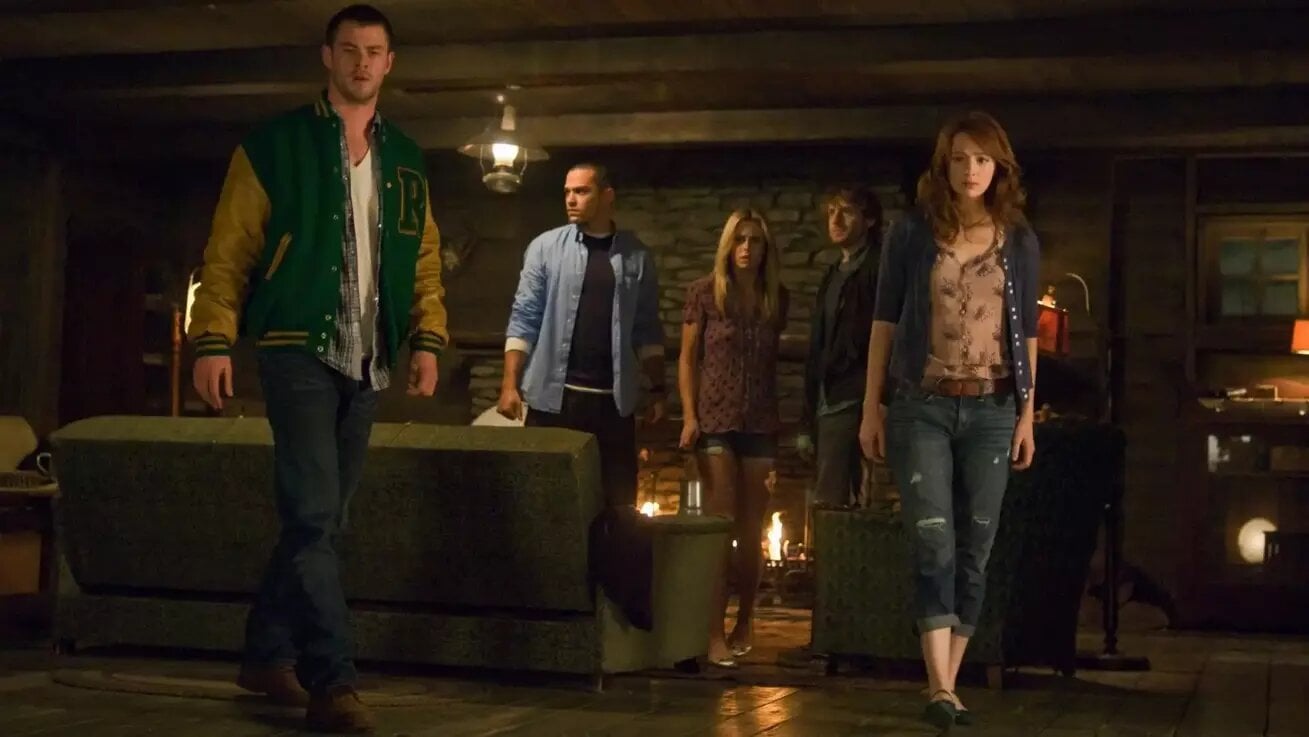 10 Decades Afterwards: ‘The Cabin In The Woods’ Is Continue to Meta-Horror Insanity

29 replies on “10 Decades Later: ‘The Cabin In The Woods’ Is Even now Meta-Horror Insanity”

Love this movie. Hard to do a follow-up, but I feel like there was so much more that we could have seen. Also playing NIN’s “gave up” over the credits was excellent

From a non horror fan, The Cabin In The Woods was such a perfect little jewel of a movie. It’s simple excellence impressed me so much, I was actually blown away by it.

I could have just watched a whole film with Bradley Whitford and Richard Jenkins being quippy and sarcastic in an underground facility tbh.

I saw this in the theater with no prior knowledge thinking it would be, at best, a throw away experience like cabin fever or something. Needless to say I was pleasantly surprised. It’s like a roller coaster that starts out gentle and even though you know the crest is coming youre not expecting it to endlessly plummet straight into the pits of hell at greater and greater velocity. It will forever remain one of my all time favorite movies

Closest thing to an SCP movie.

Yet another thing I can’t believe is a decade old. Love this movie, one of my favorites for sure.

I watched Cabin in the Woods at least 20 times on streaming because every time I would watch I would discover new details. I absolutely love this movie.

When this movie first came out, I actually watched it in the theater knowing absolutely NOTHING about it.

I had never seen a trailer for it. Nobody even recommended it to me. I just was bored one night and was willing to go to the theater and watch literally anything. A generic horror movie about a bunch of kids in a cabin was the most appealing thing to me on that particular night.

All I had seen was [the poster](https://m.media-amazon.com/images/I/51jWuSk6tVL._AC_.jpg). No trailer. No word of mouth. Nothing.

During the opening scene when the two guys are chatting about whatever and one of the guys is talking about baby-proofing his house or something, the title card comes up and… that was easily the hardest I had ever laughed in a movie theater. I was not ready for it at all.

[This film forever cemented my love of the song ‘Roll With The Changes’ by REO Speedwagon](https://www.youtube.com/watch?v=nEidbkibsiE)

I am never going to see a Merman 🙁

Took a friend to see this movie and went in just thinking it was a straight horror movie…half way through it I was enthralled and my friend, let’s just say, she wasn’t. The movie ended and she looked at me and asked what the hell was that, she hated it, I on the other hand still love it. 10 years later she still refers to it as terrible.

I gotta say this is still my favorite horror movie…

…mostly because it’s deceptively not a horror movie

Because I knew it had comedy and meta elements I told my mom, “You can watch this one with me. It probably won’t be that bloody.” Whew, big mistake.

The little Japanese school girl saying “The evil is destroyed” while holding a frog in her hands and the American guy cursing at her on TV is the funniest thing!

Cabin in the woods is only 10 years old? I thought it was older than that

I remember seeing previews for this and thinking that it looked like the most generic teen slasher and then saw the glowing reviews and had to see what was up. My mom wanted to go with me too and after the smash cut to the title, I looked over to her with a big smile and she looked at me and asked “What the fuck are we watching?”

That Release the Monsters scene still gets me. Just so many references and so much gore.

I leaned forward in my seat, reading as many as I could, and thought, *”if anyone could make a movie with all of those monsters in it, it would be the best movie ever.”*

10 years later and I still think Cabin in the Woods is one of the best movies ever.

Richard Jenkins has some of the best F-bombs ever committed to film in this. Every scene with him and Whitford is solid gold.

Fun fact about Cabin in the Woods is there is a subtle Left 4 Dead reference. You can briefly see the Special Infected Zombies in the wide panning shot with the rest of the monsters.

Does that make Cabin in the Woods the best video game movie by default?

I interned with the audio post house that did the sound for Cabin and it was magical. I was lucky enough to be the intern on stage when they printed it to film, meaning I got to watch the whole movie twice in a row (once in stereo and once in surround).

I was so excited and told all my friends about this great movie coming out…and then it didn’t for 3 more years because of MGM’s financial difficulties. It was pretty satisfying taking my friends when it finally came out and the sweet taste of vindication.

My fave story from Cabin is from Dane Davis, the supervising sound editor. He was talking about sounds he’d used to make the “dragon bat”. He had also done the sound on the live action Speed Racer movie, which has an adorable monkey character. They sent out to some foreign studio to record monkey sounds (German, I think?) for the character. What they got back was practically unusable. It was like *one* cute “oooh oooh ooh ahhh, ahhh” and three hours of full-throated, blood-curdling monkey screams. Not so great at the time but a treat when it came time to design the dragon bat.

My canon is that all horror movies exist in the Cabin in the Woods universe and are just depictions of the various local rituals.

Every time I watch it I hope that they pick a different object in the basement. The same movie but magic unlimited sequels. know they won’t obviously, but I still hope they do.

This series absolutely deserves a prequel with the same under ground facility employees. Maybe even a mini series.

The retractable bong/thermos is my favorite movie prop of all time.