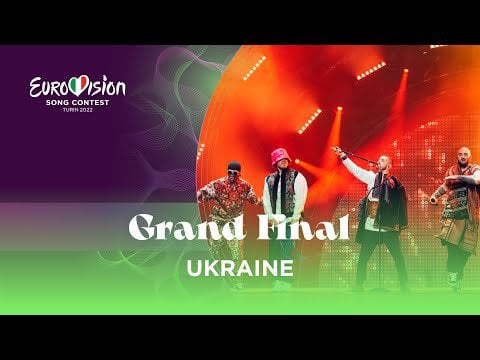 On a side note from this whole Ukraine situation, I fucking hate the jury. Just look at Moldova and how they swayed their situation. My Serbian jury has a history of being snobbish and refusing to give points to songs which have folk or turbofolk motives, or songs that are out of the ordinary Eurovision types of songs. They gave Moldova 0 points, although we gave them 12 points from the televote. Not to mention giving Azerbaijan 12 points both in the semis and now, although they received only 3 points from televoting in the final in total, and 0 from the semis, with Azerbaijan having that controversial past with allegations of buying jury votes.

This is a contest of love and peace. All these entries did wonderful all deserved to win. Maybe MAYBE they didn’t deserve 434 points, but they deserved first place as much as everyone else. The Jury had them at 4 so clearly they were wonderful. Maintain respect and love <3

I mean let’s be honest, Eurovision has always been somewhat political. You always know who Greece will give 12 to, so is Cyprus. Same for other friendly countries giving each other votes no matter how the performance is. It’s the popularity show more than anything else, and Ukraine is popular this year. With that, their song/performance deserves it either way to my taste. I’m glad people of Europe has united. Solidarity is very important today.

How can people say it’s rigged when the PUBLIC voted for Ukraine to win. It may be for a political reason but people voted with their hearts

To put out a different take, half-jokingly: I think Ukraine was a great song on merit and it would’ve scored higher with the juries but the juries did everything to not seem biased towards them lol

As a eurofan, I just admit that this edition was very political.

Ukraine gave us Verka Serduchka, they can win as much as they like in my eyes

Also as an Australian, I feel like Europe is telling us we’ve outstayed our welcome 😢

Seeing Konstrakta get so many votes from the public was such an amazing moment! Girl, you made us proud!

I was really surprised how France got so few points, were they really that bad?? It was in my top 5.

And congrats to Ukraine! They had a top 10 song regardless of the political situation, so I’m not salty at all.

What people often forget is that Eurovision isn’t just about crowning the new winner, it’s also watching the national finals, discovering new artists, seeing the new stage being built, watching the rehearsals and then watching the actual show. Not to mention all the memes and the ever growing iceberg that we got this season, the stage malfunctions, the hilariously bad postcards, I could go on, but you get the point.

It’s a lovely 5 month experience, at least for us eurovision fans 🌞

I had Ukraine 13th, although I kinda knew it was going to win. In an ordinary year that song would have been 12th-16th.

Imagine your country was invaded and bombarded, and people around would be commenting of how things were not fair to their countries…

Did Ukraine win fair and square? – Yes! 100%
Did politics/war influence this years results – Probably (I’m sure polls will be made on why people voted for Ukraine)

What annoys me is that most people voted for Ukraine to show support for Ukrainians which is literally the cheapest way possible to show support. Not by helping refugees or donating money to actually support Ukraine. But by voting for them in a Song contest and resulting in a win, that won’t help them in any way with the current struggles they face.
Millions of Euro was spent across Europe to make Ukraine win. Money people could have donated to Ukraine support, but instead has gone to broadcasters wallet.

Congrats to Ukraine on winning the 66th Eurovision Song Contest. It is a great song, (I loved it personally)

But to the people who only voted for Ukraine in ESC to show “their support”. And not doing it by helping refugees or donating money. Shame on you!

Some people here are acting like Ukraine had 0 chances of winning if not for the war. Let’s not forget Shum swooped the televote last year and got 2nd place with the public. And imo, Stefania is a much better song than Shum, whilst having a similar vibe, so I totally understand it getting 1st place. Would it have been such a landslide without the war? Maybe not, but the chances were still there.

Definitely not a song worthy of so many points.

Public tele votes are already up! Just 7 countries didn’t give Ukraine 12 points. I am really happy to see so much love from world to Ukraine

Ukraine would’ve easily been top 3 in any other year, are you telling me they were worse than Moldova, the 2nd placed county by televoting? Eurovision has always been political whether you like to admit it or not, but this song is a banger and deserves the win anyway.

I mean it’s obvious why it is impossible to not get political when it’s public votes, but I just wish they’d stop pretending that the program isn’t politically skewed.

I have nothing against it being like that, just the pretending of it not being so.

Do people actually think ukraine would’ve won if it wasnt for the war?

I feel that this represents the slow death of the ESC for the next years, with the “good feeling winners” we had that gave “some prestigious” to the contest (Euphoria, Sobral, Maneskin…) and now this, all lost.

I was a fan of the ESC and have been watching religiously for 14 years. But I remark, WAS. I don’t know if I can defend this to whoever says that it’s all political and not worthy of participate or try to be good

I don’t know… the ESC lose so much magic for me, I don’t know I will be watching next year; if I want to see a popularity contest or political support messages/speeches/events, I would be watching the European Commission/Parliament stream, not the ESC

That televote sequence just made me feel awful. 24 other acts put their heart and soul into this for months and deserved to be judged on their music, not on what was or wasn’t going on in their country. The constant low scores were heartbreaking to hear.

I wonder how this affects artist participation going forward. Any veneer of fair and objective competition is now gone – who wants to participate in something like that?

So many people here and on instagram saying how much it’s unfair… can every one of these people honestly say they didn’t send a single vote of their 20 to Ukraine?

Congratulations to the UK for the win! Fantastic result!

What this reddit thread has shown me is that people are truly horrible.

1. Ukrainian song was daring, creative, original, well performed and insanely catchy. The way they infused folklore with hip hop was ingenious. It had lyrical and musical depth. There was no entry like theirs. They were my favorites from the very beginning. I’d like to remind everyone that ESC voters love ethnic songs, as has been proven year after year, the latest example is Ukraine coming second last year.

2. “Political voting”. First of all. War isn’t political. Invasion of a sovereign country and murder and torture of hundreds of thousands civilians isn’t political. It’s personal. If you believe Europeans showing support to the traumatised, impoverished Ukrainians who are losing their loved ones and fighting for their lives every single day is “political” I’d like you to reasses your empathy, if you have any.

Second of all, who’s to say what’s political voting and what’s not? A musician doesn’t exist in a vacuum. There’s a lot of factors that come into play when we decide who to vote for and it’s not just the entry that appeals to us a lot of the times. Is someone voting for Slavic folk because they’re Slavic themselves political? Is someone voting for a LGBTQ+ performer because they relate to their struggles political too? I’d say not. There’s almost always more factors involved than just simply liking the song itself.

If we’re talking about “political” voting maybe we should ban jury votes since the majority of 12 points are awarded to the neighboring countries. But I guess people don’t have a problem with Sweden always ranking Denmark or Norway the highest.

3. “Pity voting”. It’s not pity. It’s admiration I feel for Ukrainians. It’s expression of admiration and support. If you genuinely believe that people voting for a song that would’ve likely come close to winning anyway in order to show support for a country going through hell is the “worst thing to happen to Eurovision” and a reason to boycott it… Then please boycott Eurovision. Because I promise you Eurovision is not meant or targeted towards individuals like yourself.

This was the first Eurovision I’ve watched and I have to say that I think Ukraine deserved the win, war or no war. They were unique, fun, and the flute playing was impressive.

Spain was so good too, I’m happy that they did well! Wish Americans could vote!

Am I the only one here that actually loves the Ukranian song? Was definitely my favorite this year…

Latvia did better with the juries than the tele???

Sometimes I wish Ukraine didn’t win. But not because they didn’t deserve it, but because of the hate they’re getting.
Extremely unique song, first song that has rap in it that won Eurovision, ethnic vibes that people love, ranked high even before the war, immensely popular in Ukraine, but many people will judge them only because of the war
“Pity votes”. So sad…